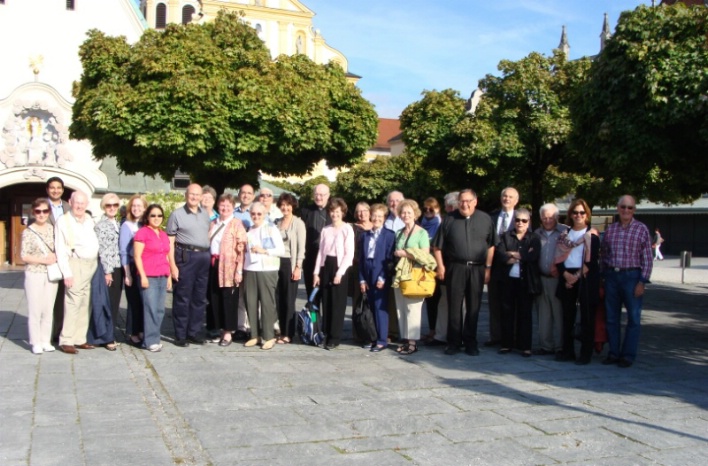 The John Carroll Society was founded in 1951 to create a vibrant spiritual community of Catholic professionals in the Archdiocese of Washington and to support the Archbishop of Washington in appropriate projects.

Today, the Society numbers 1,200 members, embodying the Church’s understanding of an active laity as participants engage in Christian fellowship, heightened prayer life, continued education in the faith and charitable outreach.

Commenting on the state of the John Carroll Society, Philip M. Hannan, the former Archbishop of New Orleans and first chaplain of the Society, observed that this association of Catholic professionals and businessmen and women had finally evolved into the organization envisioned by its founders half a century ago. Indeed, Archbishop Hannan, as one of those founders, has seen how the Society responded to the extraordinary changes that have occurred in both the nation and the American Church during the later twentieth century.

Postwar Washington dictated the need for an organization of Catholic professionals in the new archdiocese. By 1950, the capital had shed its sleepy southern town image and was assuming the trappings of an international metropolis. The local Catholic Church was undergoing a similar expansion. Washington emerged in 1948 as an independent archdiocese, split off from that of Baltimore. The number of Catholics in the new archdiocese numbered about 150,000.

Secretary of the Navy John L. Sullivan and two friends, Judge Matthew F. McGuire of the United States District Court and prominent attorney, William E. Leahy, noted the isolation of the city’s Catholic professionals who had no organization similar to the vibrant Catholic Alumni Society of Boston. As a result, the three approached the new Archbishop of Washington, Patrick A. O’Boyle, and proposed the organization of a similar group in the capital. O’Boyle immediately accepted the suggestion and assigned then-Father Hannan to help form the organization.

A year later after much planning, the organization was ready to be launched and on March 4, 1951, the founding meeting of the John Carroll Society, named for the first Catholic Bishop of the United States, took place with 280 lawyers, physicians, educators, congressmen, Administration officials and prominent businessmen in attendance at a communion breakfast at the Mayflower Hotel.

The founders’ chief concern during the planning period for the Society was that the group be primarily spiritual, enabling members to grow in their faith and inform them, from a Catholic standpoint, on the vital questions confronting postwar society. The group was not to be a money-raising vehicle nor would it be a political pressure group. Instead, the Society would encourage members to become more active in their particular professions, which, in turn, the organizers reasoned, would benefit both the Church and the nation.

Gradually, the Society became involved in public programs for the Archdiocese. On October 5, 1952, the first televised Mass for Shut-Ins in the nation took place and the Society continued to underwrite this weekly Sunday activity fifty years later. The Sunday program has not only provided religious solace to the aged and infirmed, but also educated many Catholics about their central act of worship.

A short time later, the Society assumed responsibility for the annual Red Mass, which invoked the Holy Spirit’s blessing on the nation’s judiciary and lawgivers. This ancient Church ceremony—denoted the Red Mass after the color of the vestments used in a votive Mass of the Holy Spirit and in reference to the traditional color of judicial robes, had been revived by Catholic University’s law school in 1939. Archbishop O’Boyle decided St. Matthew’s Cathedral would be a more appropriate venue for the event, and the John Carroll Society, which counted many jurists and congressmen among its members, an appropriate sponsor.

On February 15, 1953, O’Boyle celebrated the first Society-sponsored Red Mass. In succeeding years, the congregation has frequently included the President of the United States and leading federal jurists, cabinet officials, congressmen and diplomats. Today, the Red Mass is celebrated annually on the Sunday before the first Monday in October, prior to the opening of the Supreme Court’s judicial year.

In 1965, then auxiliary Bishop Philip Hannon, was named Archbishop of New Orleans. At the time, the Society’s members numbered 700. However, during the next few years, the Society became less active and membership fell to under 500 by 1969.

The 1970s brought a new Society chaplain (Father William F. O’Donnell, in 1971) and a new archbishop (William Baum in 1973) and the Society slowly began to reinvigorate itself, beginning with the admission of the first female member, Ellen Lee Park, an assistant United States Attorney, in 1975. By the following year, twelve of the thirty-five new members were women.

By 1980, Washington had another new Archbishop, James A. Hickey, (later Cardinal Hickey) who delivered the Red Mass homily to a packed congregation. Chief Justice Burger declared the sermon one of the two best he had ever heard in a Catholic church and offered to call the chief judges of the area’s federal courts and encourage their greater attendance in the future.

Unfortunately, membership had continued to decline in the 1970s and by the early 1980s, it stood just below 400, twenty percent of whom were over 70. But by the early 1980s, an activist Board of Governors was determined to revitalize the group. Hickey met with the Board of Governors in October, 1983 in the first of annual dinner meetings with the group. He proposed that the group become a strong supporter of lay participation in the work of the archdiocese.

By 1987, the Society had a new chaplain, Peter Vaghi (a graduate of the University of Virginia law school and a practicing attorney before his delayed vocation). Vaghi defined the constitutional purpose of the Society as “enhancing” fellowship among the members who were dedicated to the archbishop and engaging in actions that accomplished his purposes. The chaplain understood that an influx of young professionals might well transform the Society into the activist organization sought by the archbishop and the Society’s Board of Governors.

During the eighties, the group concentrated on improving the fellowship at the meetings and considerably improving the quality of the speakers at Society events. Speakers were scheduled three years in advance, permitting top-notch Catholic speakers to fit Society events into their busy calendars.

By 1994, visible progress was evident with membership then topping 800. Meanwhile, Father Vaghi became pastor at the newly renovated and historic St. Patrick’s Church in downtown Washington. Except for the annual Red Mass, Masses as part of Society events were scheduled at this centrally located church, close to several hotels where a brunch usually followed Sunday events.

Other events began to pick up steam also. In 1987, the annual banquet was reinstated with Justice Antonin Scalia as speaker. The Society began to award the John Carroll medal to distinguished professionals and conferred honorary membership on large numbers of distinguished leaders including Pope John Paul II in 1995.

Over time, the Society organized a committee system to designate a specific sponsor for each Society function. The Society achieved fiscal order and stability so that by 1997, even with increased contributions to diocesan causes, the Society had accumulated a reserve of $110,000.

The Society branched out into new areas as it developed. In 1985, Cardinal Hickey called in physician members, Harvey, Pellegrino and Thomas Curtin to discuss the formation of the Archdiocesan Health Care Network. Eventually, this network resulted in hundreds of thousands of dollars of free health care for the poor.

With the increased prominence of health care professionals in the Society, the first Rose Mass was held at St. Patrick’s in 1991. Held annually now on Laetare Sunday when rose vestments, a color meant to signify life, are worn by the celebrant, the Rose Mass honors physicians, dentists, nurses, medical social workers, administrators and all associated with health care. The Mass with its expert homilists quickly began to rival the Red Mass in prestige and public notice.

In 1988, Cardinal Hickey contacted Father Vaghi and charged the young priest-lawyer with the task of creating a pro-bono legal program in Washington, similar to the Healthcare Network. By 1989, the Archdiocesan Legal Network was founded which, over the years since, has provided millions of dollars of pro-bono legal assistance to the poor.

Spiritual renewal was not neglected in these years. In the late 1980s, the Society began days of recollection, one around the beginning of Lent, at the Washington Retreat House, and another at a regional, spiritual pilgrimage site. Special First Friday programs were instituted at St. Patrick’s with now-Monsignor Vaghi presenting various meditations at sessions dubbed the First Friday Fellowship. Annual pilgrimages commenced with trips to Italy, Ireland, France, Spain, the Holy Land, Greece, Eastern Europe and Canada.

*Much of this historical material is derived from a history of the Society compiled by Dr. John Harvey and written by Morris J. MacGregor.