On February 15, 1953, Archbishop Patrick A. O’Boyle celebrated the first John Carroll Society sponsored Red Mass at the Cathedral of Saint Matthew the Apostle. In succeeding years, the congregation frequently has included the President of the United States, the Chief Justice of the United States, and Associate Justices, other leading federal, state and local jurists, cabinet officials, members of Congress, diplomats, university presidents, deans, professors, students of law, and lawyers.

The Red Mass is celebrated annually at the Cathedral, traditionally on the Sunday before the first Monday in October, which marks the opening of the Supreme Court’s annual term. Its purpose is to invoke God’s blessings on those responsible for the administration of justice as well as on all public officials.

Since its inception, the Red Mass has remained the ceremonial highlight of the Society’s year. Liturgically, the Red Mass is celebrated as the Solemn Mass of the Holy Spirit. Its name derives from the traditional red color of the vestments worn by clergy during the Mass, representing the tongues of fire symbolizing the presence of the Holy Spirit. 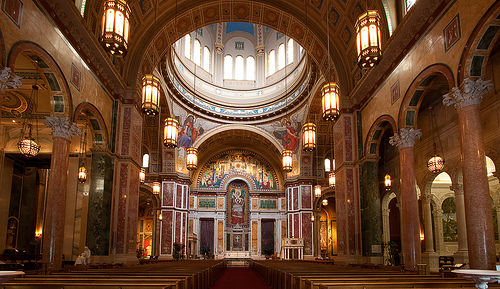 The Cathedral of St. Matthew the Apostle, where the Red Mass is celebrated.

The Red Mass enjoys a rich history. Originating centuries ago in Rome, Paris and London, its name also exemplifies the scarlet robes worn by royal judges that attended the Mass centuries ago. The Red Mass historically marked the official opening of the judicial year of the Sacred Roman Rota, the Tribunal of the Holy See. During the reign of Louis IX (Saint Louis of France), La Sainte Chapelle in Paris was designated as the chapel for the Mass. In England, beginning in the Middle Ages and continuing even through World War II, judges and lawyers have attended the Red Mass, which today is celebrated annually at Westminster Cathedral.

In 2014, EWTN News Nightly featured a news segment regarding the Red Mass, including an interview with John Carroll Society Past President Elizabeth B. Meers. The segment can be viewed below.

(To enable full-screen viewing, start the video and click on the "Full screen" icon in the lower right corner of the frame below.

Each year, at the Brunch following the Red Mass, the Society confers its Pro Bono Legal Service Awards to thank lawyers and law firms that have provided outstanding service to the Catholic Charities Legal Network.