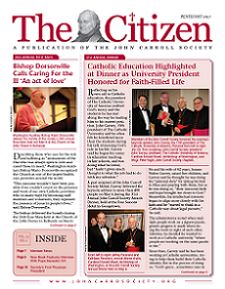 On September 9, 2014, His Eminence, Seán Cardinal O'Malley, Archbishop of Boston, delivered the Fall Lecture, entitled "Pope Francis and The New Evangelization," to a packed auditorium at The Newseum.

To listen to a recording of the lecture, please click here. 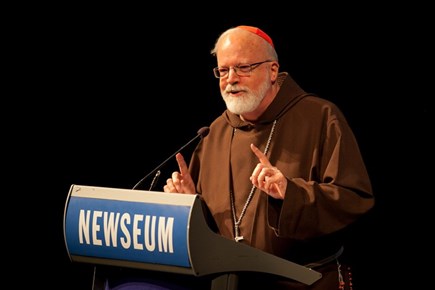 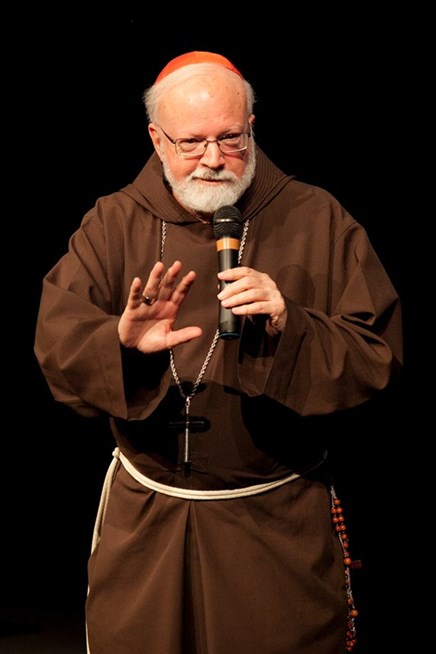 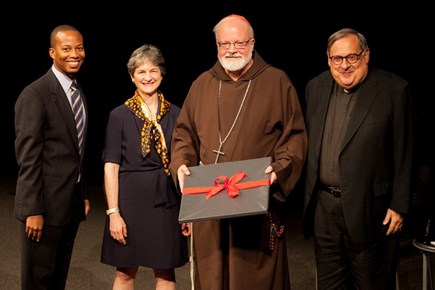 To learn more about Cardinal O'Malley and his service as the Archbishop of Boston, click here. Also, the Cardinal's blog can be accessed here.

At the John Carroll Society Annual Dinner on April 26, attendees were welcomed with a video address from His Eminence, Donald Cardinal Wuerl.

Cardinal Wuerl had recorded the address before leaving for Rome, where he was at the time of the Annual Dinner for the Papal Mass and canonizations of Pope John Paul II and Pope John XXIII.

In his address, Cardinal Wuerl thanked the John Carroll Society for its continued service to the Archdiocese of Washington, which is celebrating its 75th anniversary this year.

The video can be viewed below.
(Click on the "Full screen" icon in the lower right corner of the frame below to enable full-screen viewing.)

Pope Francis’s style of sharing Christ’s love with the poor and sick – which has been characterized as “the Francis effect” in the pope’s first year – is a way of living and sharing the faith that members of the John Carroll Society in the Archdiocese of Washington have been demonstrating for many years, Cardinal Wuerl said March 30.

Speaking after the annual Rose Mass at the Church of the Little Flower in Bethesda celebrated to pray for health workers, Washington’s archbishop thanked the John Carroll Society members for faithfully volunteering in Catholic Charities’ health care and legal networks serving the poor.

“Francis doesn’t just tell us what the Gospel says – he shows us how to do it. Thank you for helping that resonate here in the archdiocese,” Cardinal Wuerl said at the Rose Mass brunch, where four lay volunteers with Catholic Charities Health Care Network, and a local priest serving as a hospital and nursing home chaplain, were honored.

Cardinal Wuerl presented a special medallion commemorating Pope Francis’s first year to Elizabeth Meers, the society’s president; Dr. Thomas Winkler, the Rose Mass Committee chair; and to Msgr. Peter Vaghi, the society’s chaplain and the pastor of the Church of the Little Flower.

The Rose Mass is celebrated annually to seek God’s blessings on the medical, dental, nursing and allied health care workers, and on the many health care institutions in the Archdiocese of Washington. Since 1992, the John Carroll Society has sponsored the Rose Mass in the Archdiocese of Washington on Laetare Sunday, the fourth Sunday of Lent, when the vestments worn by the celebrant are rose-colored. The rose also symbolizes life, whose care is entrusted to the healing professions.

During the brunch following the Mass, the 2014 Pro Bono Health Care Awards were presented to Dr. Elizabeth Dugan, a dermatopathologist; Dr. Robert Murphy, an ophthalmologist and retina specialist; and to Dr. Joshua Yamamoto, a cardiologist. All volunteer with Catholic Charities’ Health Care Network, as does Dr. Salvatore Selvaggio, a dentist who received the 2014 James Cardinal Hickey Lifetime Service Award, named for the former archbishop of Washington who worked with a small group of doctors to found the Health Care Network in 1984. This past year, the 220 volunteer doctors, dentists and specialists in the network, along with participating hospitals and clinics, provided more than $6 million worth of charitable care to 1,915 patients.

Also at the Rose Mass brunch, Father M. Valentine Keveny, the Catholic chaplain at Shady Grove Adventist Hospital in Rockville and Asbury Methodist Village in Gaithersburg, received the 2014 Msgr. Harry A. Echle Award for Outstanding Service in Health Care Ministry, named for a priest who served as a longtime hospital chaplain in the archdiocese.

Earlier at the Rose Mass at the Church of the Little Flower, Jesuit Father James Shea noted in his homily how Pope Francis at a general audience at the Vatican this past November kissed and embraced a disfigured man, who later said, “I had never felt so peaceful, so accepted.” The priest said that grace is what Mother Teresa was talking about when she described serving the sick and dying as recognizing “Christ in distressing disguise.”

Father Shea, the provincial of the Maryland Province of the Society of Jesus who earlier served as director of medical center ministry at Georgetown University Hospital, reflected on that day’s Gospel reading about Jesus healing the man born blind, a man who was the object of scorn, begging by the side of the road. He noted that Jesus explained that the man’s blindness was not a result of sin, but “so that the works of God might be made visible through him.” (John 9:3)

“Can it be that illness and suffering can be a spiritual journey that can draw us deeper into God’s love?” the priest asked. “Can it be that human brokenness is holy ground? Can Catholic physicians, nurses and others who serve the sick have more than a profession, but a vocation, a holy calling?”

The priest noted that on a more profound level, the story of Jesus healing the blind man “is a story of coming to faith in Jesus.” After he was healed, the man recognized Jesus as his Lord and savior, Father Shea said. “We all need to be healed of blindness and see Christ as our light and the light of the world.”

And as with the man born blind, that new way of seeing can come about by encountering Jesus, and seeing the world, our sick and needy brothers and sisters, and our own brokenness “with new eyes,” Father Shea said. “This morning, we meet the Lord, in church community gathered, in Word proclaimed, (and) in Eucharistic meal shared.”